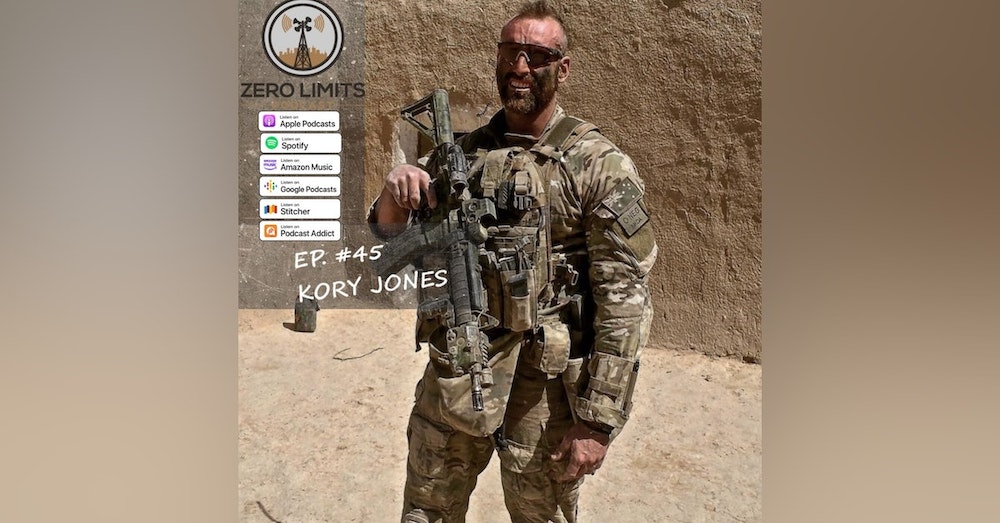 On today's Zero Limits Podcast we have a chat with man mountain Kory Jones former Infantrymen, Special Forces 2 Commando Regiment and Private Security Contractor. Growing up in a small town in Victoria working as a nightclub security bouncer, Kory has his sights set on joining the Australian Army enlisting in 2001. After successfully completing recruit and infantry IET's Kory was posted to 1RAR in Townsville. During his time in 1RAR he was posted to Mortar Platoon and Recon Platoon also deploying on 3 overseas deployments Timor Leste, Solomon Islands and Afghanistan. After his 2007 Afghanistan trip he decided to attempt SASR selection in which after 10 days he threw in the towel being overtrained physically but under prepared mentally. In 2009 after mental lessons learnt from failing SASR selection, Kory underwent 2 Commando Special Forces selection training which he completed and successfully become a Commando.

In 2010 he deployed on his second trip to Afghanistan with SOTG (Special Operations Task Group) with heavy fighting against the Taliban. 2012 was round three, fighting this time alongside the DEA and NIU smashing drug network in support of the American push to re dominate Helmand. In 2013 Kory discharged from the army and become a private security contractor working in Kabul for the Australian Embassy. Currently Kory is living in the UAE paramilitary advisor to the UAE government. get ready for this one Let's GO!